The Day I Met a Legendary Hero - Michelin Raceway Road Atlanta
We use cookies to understand how you use our site and give you an awesome experience.
By using our site, you acknowledge that you have read and agree to our Privacy Policy and Terms of Use.

Spot Light: From the Fans

The Day I Met a Legendary Hero 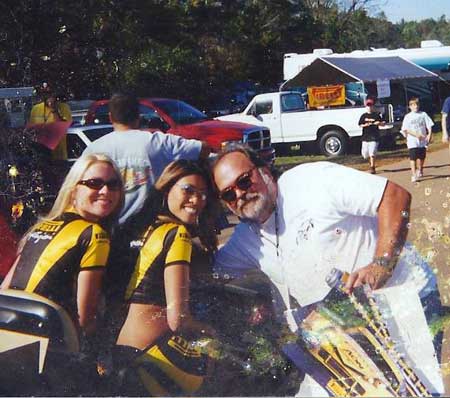 I have attended at least three events a year at Road Atlanta since 1981 so I have many great memories but I'll share my favorite.

It was a Saturday afternoon in '92, I believe, of an IMSA weekend when I took a walk by myself to the old paddock, the only one at that time. As I passed behind the main office and garage building I noticed a man in a Toyota team shirt, khakis and loafers walking up the steps from the timing tower. I recognized him as he neared. It was one of my biggest heroes, Dan Gurney!

Having been on stage and back stage at many concerts I'm not often 'star struck' so I continued on and met him at the top of the steps. I said, "Hello, Dan. It's a pleasure to meet a hero." After introducing myself and shaking hands I mentioned that I had read that the team had made a change to the front suspension of the Mk III GTP's. Dan confirmed that and began explaining the changes when he said, "It would be easier just to show you. Do you want to take a look?" That was a "Is the Pope ...., Does a bear ... kind of a moment! Without hesitation I assured him that I did want to have a look. We chatted about their lap times and qualifying that weekend as we walked to a garage door. Dan unlocked and rolled the door up and there was a spare Mk III! He told me to go around the left side and pop the 'Zeus' pins on the nose of the machine. Having wrenched on some race cars I knew what those were, so I didn't look too stupid! We popped the nose off and leaned it against the wall and then school began! Dan spent at least ten minutes describing and explaining all of the geometry, not just the changes, but the science behind the choices they made. Center of gravity, weight distribution, sprung weight, etc. It was truly amazing to find that a sportsman of his caliber was such a gracious man both on the inside and the outside.

Before I headed on my way I thanked him again and proved my knowledge of his career. I congratulated him for bringing Porsche (a two syllable name) their only F1 win, for building and driving the only American built car to win an F1 event, and for his continued success in IMSA GTP. He smiled, chuckled and thanked me while we shook hands again. As I walked away I turned and said, "Oh yeah, Dan, thanks for sneaking to the race tracks instead of going to your violin lessons in your teens!" He laughed hard, waved good-bye, turned and continued on his way chuckling. Dan Gurney proved to be one of the finest men that I have ever met ... a true champion in life. What a moment!