DPi Goes Down to the Wire with Last-Lap Lunge 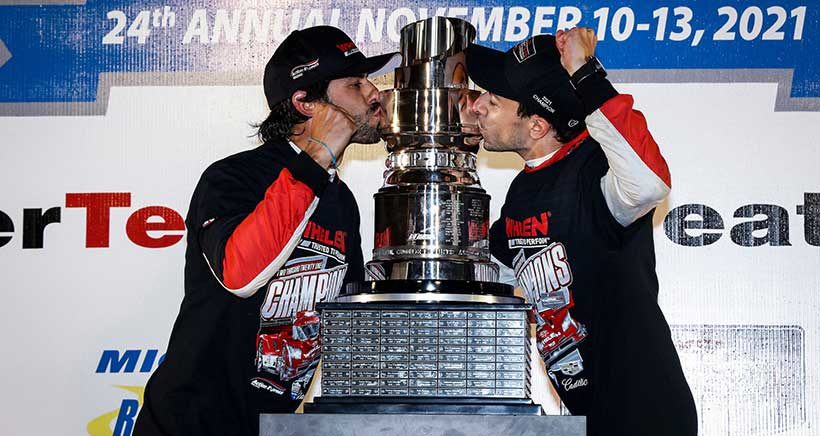 The route to the championship was straightforward: The top finisher among the two contenders at Michelin Raceway Road Atlanta would be the champion.

The finish, of course, was anything but straightforward.

Felipe Nasr held on as Ricky Taylor tried to pass him on the final lap Saturday night, recovering after Taylor bounced through a gravel trap and back on track in front of him, to claim the IMSA WeatherTech SportsCar Championship Daytona Prototype international (DPi) title by finishing second in the Motul Petit Le Mans.

Nasr was chasing eventual race winner Harry Tincknell but leading the championship battle when Taylor tried to pass Nasr heading into Turn 10A on the final lap. The two cars made contact, and Taylor’s No. 10 Konica Minolta Acura ARX-05 bounced off course and returned to the track ahead.

But Nasr’s No. 31 Whelen Engineering Racing Cadillac DPi-V.R passed Taylor heading into Turn 11 and held on for second place in the race – and the championship – through the final turn of the final race of 2021 to prevail by 0.405 seconds.

“I knew he was going to try to make a last-minute move, but that was a little too wild,” Nasr said. “All the way to the gravel and then coming across the track. If there was grass there, he could have just continued. He had to go through the gravel, and then I had to drive to take the position back.

“There are many ifs. If I was behind and I had to do something, for sure you’ve got to try it. Maybe it was a little too much, but I get it. He’s a racer, too. He’s got to try something.”

While Nasr was going out as a champion, Tincknell, Oliver Jarvis and Jonathan Bomarito were helping Mazda go out as a Motul Petit Le Mans winner in its final race in DPi. Tincknell drove the No. 55 Mazda Motorsports Mazda RT24-P past Nasr for the lead in Turn 7 with 22 minutes remaining in the 10-hour race and held it to the finish.

“To be honest, I just had a feeling the whole race that the opportunity was going to open up through (Turn) 6 into 7,” Tincknell said. “It’s not really a normal passing place, but I also knew in the back of (Nasr’s) head, he had a championship to think about as well.”

Nasr’s championship run came in his final race with Action Express Racing, which announced last month that Tristan Nunez will replace him in the No. 31 car next season. Nasr’s co-champion, fellow Brazilian Pipo Derani, spoke of the emotion behind the championship.

“For me personally, it was very emotional to look back and slowly start to realize that I’m a champion,” Derani said. “I’ve learned from the mistakes I’ve made and I’ve grown so much as a person over the last year. To finish this chapter with Felipe was great.”

Taylor, Filipe Albuquerque and Alexander Rossi had the same mission as their rivals – keep the No. 10 Acura ahead of Nasr, Derani and Mike Conway in the No. 31 Cadillac. That mission was in reach for almost all of the race’s 410 laps.

3 Sep
WERA Regional Double Header
28 Sep
Motul Petit Le Mans
14 Oct
Atlanta Historic Races
We use cookies to understand how you use our site and give you an awesome experience.
By using our site, you acknowledge that you have read and agree to our Privacy Policy and Terms of Use.
I ACCEPT