Big Second Half Propels No. 25 BMW to GTLM Win in TireRack.com Grand Prix - Michelin Raceway Road Atlanta
We use cookies to understand how you use our site and give you an awesome experience.
By using our site, you acknowledge that you have read and agree to our Privacy Policy and Terms of Use. 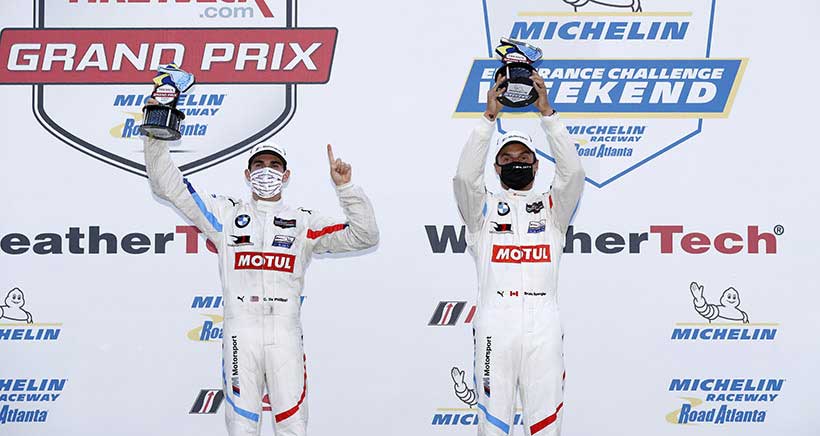 When it was go time, the No. 25 BMW went. And it wasn’t derailed on the way to the GT Le Mans (GTLM) class victory in the TireRack.com Grand Prix at Michelin Raceway Road Atlanta.

Connor De Phillippi, who shared the No. 25 BMW Team RLL BMW M8 GTE with Bruno Spengler, didn’t take the class lead until past halfway in Saturday’s six-hour race, the second of four races in the IMSA Michelin Endurance Cup.

De Phillippi grabbed first place for good with decisive passes of the No. 911 Porsche and No. 4 Corvette after the final round of pit stops with 52 minutes left. The 27-year-old American held steady from there, including a two-lap trophy dash following a final restart, to put the No. 25 in victory lane for the first time since the 2019 Rolex 24 At Daytona.

"It really came down to perfect execution," De Phillippi said. "We had a fast car; the car was hooked up, the setup was really good. I think we didn’t have the fastest car early on but as the track rubbered in, we were able to have more pace throughout the stint. … At VIR (two weeks ago), we got P2 and I told (Spengler), ‘Man, we’re on the brink of a win,’ and we pulled it off today."

Starting fifth in class, De Phillippi and Spengler were content running in the shadows of early race leaders Nick Tandy and Fred Makowiecki in the No. 911 Porsche GT Team Porsche 911 RSR-19. The No. 25, in fact, didn’t lead on the 2.54-mile, 12-turn road circuit until the No. 911 made a pit stop three hours into the event. Even then, the BMW was out front a mere six minutes until making its own stop.

From there, Spengler kept the No. 911 in his sights until turning the No. 25 over to De Phillippi on the final stop with 55 minutes to go. When the Porsche and Corvette completed their stops soon after, De Phillippi muscled his way into first place.

"When they came out ahead of me, I knew I had to attack and I knew I had an advantage (of warm tires) at that point," De Phillippi said. "So, I just went for it. I went for the kill and got by the Porsche. I was shocked to see the Corvette come out so far ahead of us … but once I managed to get around him on the outside of Turn 4 when he was on cold tires on his out lap, I tried to put the hammer down for those couple laps."

De Phillippi stretched the lead to as much as four seconds over Tommy Milner in the No. 4 Corvette Racing C8.R before a collision involving the No. 5 Cadillac, No. 6 Acura and No. 63 Ferrari brought out a full-course caution with 12 minutes left on the clock.

When the green flag waved for a two-lap finish, De Phillippi wasted no time putting slower GT Daytona cars between himself and the Corvette as a buffer and pulled away to win by 4.383 seconds. Jesse Krohn and John Edwards gave BMW Team RLL a pair of podium finishers by driving to third place in the No. 24 BMW.

Spengler, who won the IMSA iRacing Pro Series championship while the WeatherTech Championship season was put on hold by the pandemic, was elated to collect his maiden IMSA victory.

"It’s huge," he said. "For me, all tracks are new here except for Daytona and Sebring, so there’s always a lot of learning to do. I’m super happy that I have a mega teammate as Connor that I can always rely on. His speed and his experience is awesome. We get along super well together and that’s very important in a close series like GTLM. It’s an awesome result. I’m super happy. My first victory in IMSA with Connor."