Motul Signs On as Title Sponsor of Petit Le Mans - Michelin Raceway Road Atlanta
We use cookies to understand how you use our site and give you an awesome experience.
By using our site, you acknowledge that you have read and agree to our Privacy Policy and Terms of Use.

Motul Signs On as Title Sponsor of Petit Le Mans 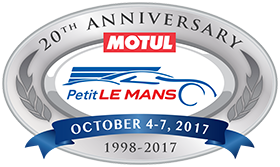 The long-term Motul partnership with Road Atlanta will include prominent trackside and facility-wide signage, display, hospitality and a robust in-market activation element.

“Motul set foot in the United States more than 25 years ago, yet we were missing a US landmark where we can share our passion for motorsport racing with our customers and Motul fans throughout the year,” said Motul USA president Guillaume Pailleret. “Road Atlanta is an iconic racing track in the North American racing world, hosting all major racing series and also an intense schedule of club racing all year long. We are extremely proud to be the Official Lubricant Partner of Road Atlanta and Petit Le Mans, as well as the entitlement sponsor for the 10-hour Petit Le Mans endurance race. Atlanta is the hub of the southern US and in that regard is also extremely strategic for us.”

The 2017 edition of Petit Le Mans will not only celebrate a new era of partnership with Motul, but it also serves as the closing of the second decade of the event. This year marks the milestone 20 thanniversary of the first running, which was the foundation for Petit Le Mans to be known across the globe as one of the most iconic races and coveted wins in the world of motorsports.

Petit Le Mans and the Motul brand are further tied together by their mutual connection to the 24 Hours of Le Mans, which has happened almost every year since 1923 in France and is the longest-running active sports car race on the planet.

“Road Atlanta is delighted to partner with Motul, a deep-rooted and truly international brand within the motorsports world, for the 20 thanniversary of Petit Le Mans and beyond,” said Geoff Lee, president and general manager of Road Atlanta. “This endeavor adds even more long-term stability to our industry and to the race track, a trend that we’ve seen across sports car racing as a whole. The combination of both Motul and Petit Le Mans’ established connection to the 24 Hours of Le Mans paves the way for a very prosperous partnership, and one that we’re very much looking forward to getting started and building on.”

ABOUT MOTUL
Motul is a world-class French company specialized in the formulation, production and distribution of high-tech engine lubricants (two-wheelers, cars and other vehicles) as well as lubricants for industry via its Motultech activity.

Motul is also recognized as the specialist in synthetic lubricants. As early as 1971, Motul was the first lubricant manufacturer to pioneer the formulation of a 100% synthetic lubricant for automotive engines, the 300V lubricant, making use of Esters technology and issued from the aeronautical industry.

Throughout the years, Motul has gained experience as an official supplier to many racing teams and manufacturers and contributes with them to further technological development in motorsports.

ABOUT ROAD ATLANTA
Road Atlanta opened in 1970 and is recognized as one of the finest road racing circuits in North America. Located less than an hour north of downtown Atlanta, the track hosts several major events during the year including the world-famous Petit Le Mans, Drift Atlanta, The Mitty vintage classic, MotoAmerica superbike event and numerous club and corporate events.