Fan Nick Calhoun To Serve As Grand Marshal at 21st Annual Motul Petit Le Mans - Michelin Raceway Road Atlanta
We use cookies to understand how you use our site and give you an awesome experience.
By using our site, you acknowledge that you have read and agree to our Privacy Policy and Terms of Use.

In honor of Dr. Don Panoz, who founded Motul Petit Le Mans and the American Le Mans Series and owned Road Atlanta for over 15 years, the honor of serving as Grand Marshal was given to a fan. Dr. Panoz built the series around the mantra “For the Fans”, so it’s only fitting that on our first Motul Petit Le Mans without him, a fan gives the start command.

“I have been coming to Petit Le Mans for 10 years,” said Nick, who hails from Griffin, Ga. “From the time I was a child, I loved the roar and the smell of race cars and I also loved the idea of traveling the world. Through watching racing on TV, I got to do just that. When I was old enough, I took the first opportunity I got to come to Petit Le Mans. It was right here in my back yard, so to speak, and it was like the world coming to me. I was able to see some of the greatest legends in the racing world up close and personal.”

“That being said, the grid walk is one of my favorite things in the world to do,” Nick continued. “The drivers, the teams and their cars are all there and accessible, so I can ask questions and learn about racing. Additionally, I love to see all of the beautiful cars that belong to spectators in the corrals. Since Wayne Taylor was the winner of the first Petit Le Mans, I have always pulled for Wayne Taylor Racing, but since Ricky Taylor went to team Penske, I'm still excited to see him do well. I think much like most fans, I have a Prototype and a GTLM team I root for. My GTLM team is definitely Corvette Racing. The engines in the C7.R are about the most beautiful and vicious things I've ever heard. However, traditionally I am an Aston-Martin fan and cannot wait for their Motul Petit Le Mans return.”

“My favorite memories so far have been from the 2015 race in the soaking rain. It was a day that had to be endured to be appreciated and my friends and I still talk about it, but getting the opportunity to meet Dr. Panoz last year is up there at the top as well. To be chosen as the Grand Marshal this year and to carry on his legacy in this small way is more than I could have ever imagined and it is an honor beyond compare.” 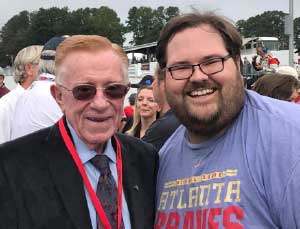 Over the last decade, my friends and I have always made Petit Le Mans the most important part of our year. It’s a sacred date on the calendar like a birthday or Christmas. We’ve developed traditions and ties that have bonded us together as life has scattered us across the southeast. There are the meat pies that were served for several years in a row that we can’t let go. There was the time Dr. Panoz almost ran over one of us in his Esperante. Most of all, we’ll never forget the rain soaked 2015 race where we used superior canopy engineering to ensure that we were the driest fans on the inside of turn 10.

Last year at the 20th anniversary, I had the opportunity to meet Dr. Panoz on the grid while he was performing his duties as the Grand Marshal. I asked him for a photo and I thanked him for bringing this race to us, for giving my friends and I these memories, and for the development that he had given to the area. I was in awe of him. He was successful in multiple ventures in his life, I expected a simple thank you and a picture, but Dr. Panoz was so much more.

He was warm, he asked where I was from and we talked about my hometown. He genuinely cared about me as a person and as a fan. I shared my experiences with him while officials tried to move him along, but Dr. Panoz embodied the “For the Fans” motto in a way that I believe no one else could. It wasn’t that he asked questions, but it was that he listened to the answers and responded. I felt like I was the only person at the race. When I found out that Dr. Panoz had passed, it wasn’t the transdermal patch, DeltaWing, Panoz Racing, or IMSA I thought about, but it was Dr. Panoz as a person and I missed him. I missed that conversation we had and felt as if one of my race friends had passed.