Coca-Cola, Porsche Join Forces for Iconic Livery on Weathertech Championship GLTM-leading 911 RSR Race Cars for 2019 Season-Ending Motul Petit Le Mans - Michelin Raceway Road Atlanta
We use cookies to understand how you use our site and give you an awesome experience.
By using our site, you acknowledge that you have read and agree to our Privacy Policy and Terms of Use.

That familiar slogan adorned the sides of IMSA legend Bob Akin’s Porsche race cars from 1980 through 1987, along with unmistakable Coca-Cola red paint scheme and the white Coke “wave.” It’s one of the most iconic liveries in IMSA history – and it’s making a comeback. 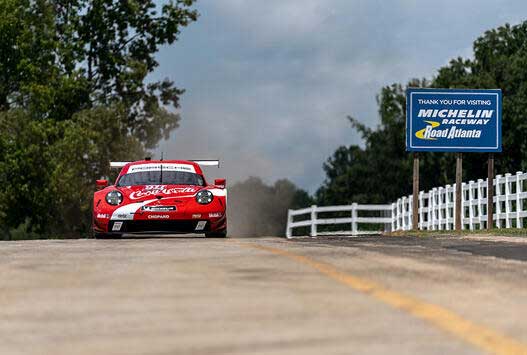 It also closes the curtain on the IMSA 50th Anniversary Celebration in spectacular fashion.

“I can’t think of a better way for fans to celebrate the final race of IMSA’s 50th Anniversary season by seeing two of the most iconic brands in the world – Porsche and Coca-Cola – bring back an unforgettable livery,” said Jim France, NASCAR chairman and IMSA chairman, who attended Tuesday’s unveiling of the livery at Coca-Cola’s world headquarters in downtown Atlanta alongside IMSA CEO Ed Bennett and President Scott Atherton.

“Bob Akin was one of a kind, much like Porsche and Coca-Cola, and to see this livery at Michelin Raceway Road Atlanta for this year’s Motul Petit Le Mans will certainly be exciting for everyone.”