BMW To Serve As Official Pace Car and Safety Car at 22nd Annual Motul Petit Le Mans - Michelin Raceway Road Atlanta
We use cookies to understand how you use our site and give you an awesome experience.
By using our site, you acknowledge that you have read and agree to our Privacy Policy and Terms of Use. 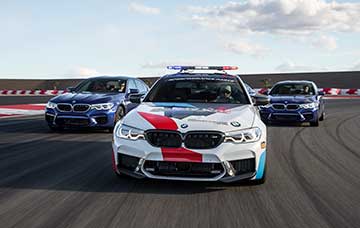 For a second consecutive year, BMW M will have a major presence at Michelin Raceway Road Atlanta during the IMSA WeatherTech SportsCar Championship weekend, as a BMW will serve the roles of both Official Pace Car and Official Safety Car for the 22nd Annual Motul Petit Le Mans.

In addition to supplying a 2019 BMW M4 CS to pace the field of IMSA WeatherTech Championship contenders and a specially modified 2019 BMW M5 Competition to serve as Safety Car for the 10-hour endurance classic and IMSA season finale, BMW of North America will host the North American premiere of two new BMW M models: the all-new, 600 hp, third-generation, track-capable 2020 X5 M Sport Activity Vehicle and X6 M Sport Activity Coupe. Both models will arrive in BMW Centers in the spring of 2020.

The BMW brand will have additional representation around the 750-acre Michelin Raceway property in the form of significant signage between turns three and five, the BMW M Experience display in the Fan Zone and a multi-story hospitality overlooking the racetrack at Turn 11 and the FOX Factory bridge. An owner’s key will open the doors to the first floor of the hospitality unit, offering BMW owners a place to view the race in a relaxed atmosphere.

“BMW of North America is pleased to play an important role in this weekend’s Motul Petit Le Mans, both on and off Michelin Raceway Road Atlanta in celebration of IMSA’s 50th anniversary” said Victor Leleu, BMW NA Motorsport Manager. “Of course our Rolex 24 At Daytona winning BMW M8 GTE racing cars will compete Saturday, but we will also exhibit The Ultimate Driving Machine® in many other displays for the fans attending the race. Auto manufacturers often talk about the synergy of racing and road cars - how the technology that transfers between the two makes for safer, more intelligent and better performing vehicles. To that, we are delighted to host the North American premiere of two new BMW M models that are produced for the world less than three hours away in Spartanburg, South Carolina. These two models are very representative of why the US is the largest BMW M market in the world.”

BMW has been a top contender in the IMSA paddock for many, many years at both a factory and privateer level. In 2018, one of the two GT Le Mans (GTLM) BMW M8 GTEs finished on the podium after 10 hours of battle at Motul Petit Le Mans, with the other rounding out the Top Five.

“BMW is an iconic marque across the globe and especially here at Motul Petit Le Mans,” said Geoff Lee, president and general manager of Michelin Raceway. “Our fans are very loyal to their brands and will, no doubt, be thrilled to see a BMW leading the field of competitors to the green flag. BMW’s presence at Michelin Raceway for the IMSA championship finale will be bigger than ever this year, and we’re proud to host the debut of their new line.”

ABOUT BMW GROUP IN AMERICA

BMW of North America, LLC has been present in the United States since 1975. Rolls-Royce Motor Cars NA, LLC began distributing vehicles in 2003. The BMW Group in the United States has grown to include marketing, sales, and financial service organizations for the BMW brand of motor vehicles, including motorcycles, the MINI brand, and Rolls-Royce Motor Cars; Designworks, a strategic design consultancy based in California; technology offices in Silicon Valley and Chicago, and various other operations throughout the country. BMW Manufacturing Co., LLC in South Carolina is the BMW Group global center of competence for BMW X models and manufactures the X3, X4, X5, and X6 Sports Activity Vehicles. The BMW Group sales organization is represented in the U.S. through networks of 346 BMW passenger car and BMW Sports Activity Vehicle centers, 153 BMW motorcycle retailers, 127 MINI passenger car dealers, and 36 Rolls-Royce Motor Car dealers. BMW (US) Holding Corp., the BMW Group’s sales headquarters for North America, is located in Woodcliff Lake, New Jersey.