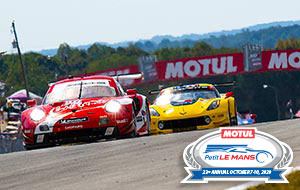 In the spirit of celebrating Michelin Raceway Road Atlanta’s 50th anniversary year, one of the three original founders of the racetrack, Earl Walker, will serve as the Grand Marshal at the 23rd Annual Motul Petit Le Mans.

As the track celebrates five decades of some of the greatest racing in the world, we are honored to celebrate Mr. Walker as one of the reasons this world-renowned facility came into existence. He and his partners had an idea to build a ribbon of asphalt in the foothills of the north Georgia mountains and since it’s inception in 1970, this racetrack has seen some of the most acclaimed teams, series, drivers and cars in all of racing history try their hand at finding victory on it’s 12 turns.

Mr. Walker graduated from Georgia Tech and worked in the aerospace industry from 1961 through 1967. During this time, he met future business partner Dave Sloyer at Lockheed Martin in Marietta. Walker and Sloyer got involved in sports car racing and decided that motorsports fans from the Atlanta area needed a place to race, and the idea for Road Atlanta came to be. They enlisted a third partner, former Coca-Cola president Arthur Montgomery, to help build the racetrack and the rest is history.

Racing fans around the world owe much to Earl Walker and his partners and their vision to create this amazing facility and we are proud to pay tribute to his contributions by having Mr. Walker serve as Grand Marshal at Motul Petit Le Mans this year.