The 24 Hours of Lemons

An endurance roadracing series for cars that cost $500 or less. 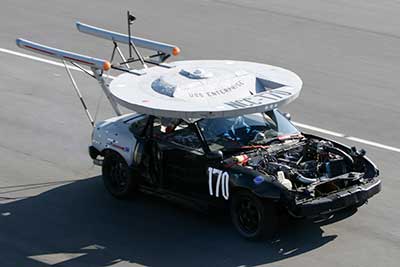 The 24 Hours of LeMons is a series of endurance races held on paved road race courses across the United States, Australia (since October 2015) and New Zealand (first event held September 2016). The series holds the Guinness World Record for the "Most participants in one race" (216 cars)

The title is a parody of the long running annual 24 Hours of Le Mans race, and lemon cars. Teams of 4 or more drivers compete for up to 24 hours in race-prepared cars that cost no more than US$500 for cars in the USA series, AUD$999 in Australia and NZD$999 in New Zealand; as with folkracing there is a price limit. These races set themselves apart from the typical road race by the unusual penalties and punishments meted out by judges, as well as a blatant disregard for traditional Motorsport politicking. The series is similar to the ChumpCar World Series (almost the same rulebook), but with a more carnival like atmosphere.

Tickets At The Gate

Kids 12 and under always enter for free

When Accompanied by an Adult.