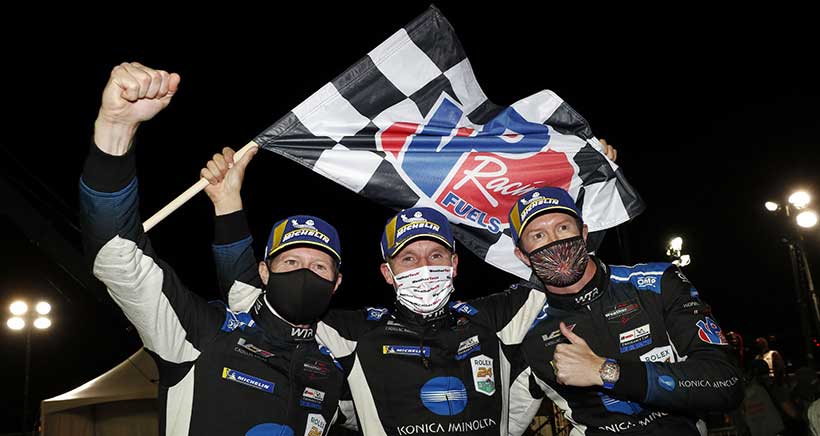 The No. 31 Cadillac and the No. 7 swapped the lead several times on the track and in the pits over the final two hours and the intensity of the battle was obvious as the race drew to a close. The leaders were rarely separated by more than a second over the last 60 minutes of the race, with Taylor putting Derani under extreme pressure on several occasions.

Working through traffic in the Esses, Taylor got a run on Derani and tried to outbrake the Cadillac into Turn 6. But the Acura appeared to lose front end grip. It nudged Derani’s car and sent it spinning backwards into a tire barrier. Taylor also spun and nearly collected van der Zande as he returned to the track. IMSA officials reviewed the incident, but decided to take no action against either driver.

Taylor and teammates Helio Castroneves and Alexander Rossi recovered to finish second, with the sister Penske Acura driven by Dane Cameron, Juan Pablo Montoya and Simon Pagenaud taking third. The race ended under caution after the No. 912 Porsche in the GT Le Mans (GTLM) class crashed with less than five minutes left on the clock.

The No. 6 Penske Acura dominated the first half of the race but got swept into an incident involving three other cars near the pit exit. The No. 5 Mustang Sampling Cadillac shared by Sebastien Bourdais, Loic Duval and Tristian Vautier finished fourth, with Derani, Felipe Nasr and Felipe Albuquerque classified fifth.